Sacre Noir
Dates have now been finalised for the Sacre Noir Summer Tour 2013. Kicking off at The Banshee Labyrinth in Edinburgh, Sacre Noir then move on to The Box in Glasgow before shows at The Vibe Bar, The Arc Islington, Power's Bar and The Dublin Castle (all London). Following on from the July dates in London, Sacre Noir will then be performing at Le Vieux Léon, Belushi's Canal and Belushi's Gare Du Nord in Paris and Soupanova, Little Stage and Pfefferbett in Berlin during August. The tour finishes off with two dates with The Penny Black Remedy at Pivo Pivo in Glasgow and Henry's Cellar Bar in Edinburgh.
More details on all dates on the Sacre Noir website:
Sacre Noir website 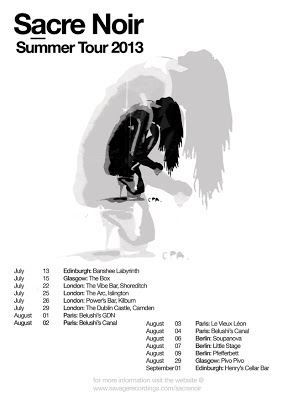 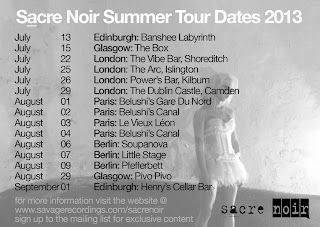 Posted by savage recordings at 03:58