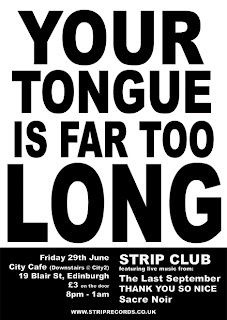 
You can also catch the savage sound system live featuring The Riddlah and Sacre Noir on Thursday the 12th July 2012 at Henry's Cellar Bar in Edinburgh. The night is presented by Killah Flow and also features Nity Gritz and Deeko (SOS). Tickets are £5 on the door, open 7.30pm to 11.30pm.
Posted by savage recordings at 07:18 No comments:

Savage Sound System
Two more collaborations between video maker PIXELPUSHER and the sSs are now online for your viewing pleasure. Music video for triple S live favourite I Keep On Rollin features footage of the savage sound system live band (featuring MCs The Riddlah and Werd) cut with effected motorway footage. The second video is of the opening track from the new sSs EP 'Liars And Thieves Will Have It All' featuring a mixture of animation and manipulated footage - well worth checking out. You can have a look on the PIXELPUSHER youtube page and download the EP for free direct from savage recordings.
PIXELPUSHER youtube.
sSs EP free download.

Savage Sound System
Another new music video from the savage sound system created by PIXELPUSHER for the track 'Those Tears Come Cheap.' This is the opening track from the album 'Like Stink on a Monkey' - the video features footage of unexplained phenomena cut to the beat / groove of the track. This track features TheSAD on bass samples, and includes samples of Werd's track 'Hospital Raps.'
Like Stink on a Monkey listen on spotify
Those Tears Come Cheap music video


Posted by savage recordings at 04:13 No comments:

Sacre Noir
'She Can't Take It' the debut single and video from Sacre Noir has been featured on music blog Kowalskiy's Singles Club for June 2012. Lots of other great Scottish releases featured too, check it out here:
Kowalskiy! Singles Club June 2012

You can also catch Sacre Noir live in Edinburgh at the City Cafe 2 on the 29th June (Strip Records Night) and appearing live with the savage sound system on the 12th July at Henry's Cellar Bar. Full details of all upcoming shows on the Sacre Noir website:
Sacre Noir website
Posted by savage recordings at 02:01 No comments:

Savage Sound System
New savage sound system music video taken from the latest EP 'Liars And Thieves Will Have It All.' Featuring the track 'Truth Has A Higher Value' with vocals from Sacre Noir this video has been created by PIXELPUSHER and stars Maisie the dog. It's a spacy mix of bubbles, effects and a very happy dog - it ticks along with the track as it develops - up now on youtube. You can grab the EP for free on the savage recordings website.
Free Savage Sound System EP
Truth Has A Higher Value music video


Posted by savage recordings at 03:25 No comments:

Sacre Noir
Part of recent Sacre Noir live sets - Time (originally by Chase & Status) has become a firm favourite with audiences and has been much requested in a recorded version. Sacre Noir now have a recording up on soundcloud to enjoy and download for free....

Posted by savage recordings at 04:12 No comments: