Sacre Noir
After the success of several live dates within the last couple of months Sacre Noir return to the live circuit with a secret DJ set at Liverpool Soundcity (details tbc), live show supporting Friends are Friends at Sneaky Pete's (Bainbridge Presents Your New Favourite Band) and a couple of dates in Edinburgh with the savage sound system live band. There has also been a re-release of the acclaimed debut LP 'Her Volatile Condition' for the USA, European and iTunes markets. More details on the new sacre noir website where you can sign up to the mailing list and receive free goodies. Also check out the sacre noir youtube channel featuring new live videos including the first ever appearance of live electronic drums within the set.
Sacre Noir website - http://www.savagerecordings.com/sacrenoir
Sacre Noir on iTunes - http://itunes.apple.com/gb/artist/sacre-noir/id435771075?uo=4
Sacre Noir on CDBaby - http://www.cdbaby.com/cd/sacrenoir 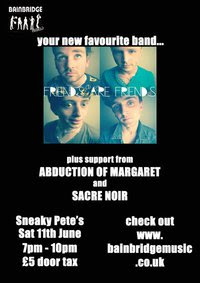 ALL CHANGE ON THE WESTERN FRONT!!!

Due to "a communication glitch", Friends Are Friends are no longer playing this gig.

Luckily, we have sorted something, dare I say it, even better for your aural enjoyment:

SANNA (www.myspace.com/sannamusic) came to our attention due to their involvement in Night Noise Team's album launch, and thanks to that glorious introduction, we are keen as mustard to work with the alternative electronica masters

FITZROY SOUL (www.myspace.com/fitzroysoul) are in my top 5 favourite bands in Edinburgh. What else do you need to know? Ok, well they are bluesy, they're groovy, they're funky, they're rockin' and they're electronic. They take all the best stuff and do it well! Cannae wait

Further support from lo-fi Electronica Goddess SACRE NOIR (www.savagerecordings.com/sacrenoir). With band in tow, you won’t get a better electronica experience in Edinburgh than when Carrie’s on her game. With a soulful, at times haunting voice backed by a solid beat, this group are worth the entry fee alone. If you like Massive Attack, you will LOVE Sacre Noir.

Savage Sound System
The infamous triple s have their first live shows of the year featuring usual suspects Werd (SOS), The Riddlah (UVBeatz) and Sacre Noir performing at both live shows. Both gigs promise to be great nights including a support slot with up and coming Liverpool MC KOF. Details below and on the savage sound system website. Debut LP 'Like Stink on a Monkey' has received the following review from Is This Music? online independent music magazine, album is still available from iTunes, the savage recordings store and all the usual online download retailers.

Is This Music?
"Everything about this release from the Edinburgh collective – in fact, even the word ‘collective’ – screams “Scottish hip hop”. Well, everything, that is, apart from the music.
To be fair, the actual term ‘collective’ isn’t prominent on the CDs sleeve notes, but with words like ‘triphop’, ‘breakbeat’, ‘electronica’, ‘MC’ and ‘samples’ on the credits and blurb, we are surely talking repetitive beats here?
Well, yes and no. Opener ‘These Tears Come Cheap’ sports some beats that batter away at the senses, a flurry of industrial mechanical clanks and clatters that is, let’s say it, pretty far removed from Eminem.
And that sets the stall out for the album. ‘How Much For The Ape’ is a massive production job, all Avalanches-style orchestral sweeps that provide a bed for the soaring and very rock vocals of Sacre Noir. There’s not even a glimmer of rap until fourth track when MC ShilohZen shows up on ‘Longroad’ to add to a sound that is already far from your bog-standard gangsta. There’s even time for some decidedly 80s pop on ‘New Town’ which even if it jars slightly does keep the listener wondering quite what may happen next. (As it happens, it’s the straight-outta-80s-Sheffield dark electro of ‘Grind’.)
The anticipated jazz skiffle doesn’t quite appear, but there’s something different round every corner, as the Savage crew twist and turn their way through a variety of genres that make for a challenging but highly enjoyable listen. There’s even some Scots-accented rap on ‘Keep On Rollin’, and it’s the predictable that somehow takes us by surprise. Highly recommended as there’s something for everyone here."
http://www.isthismusic.com/savage-sound-system-2 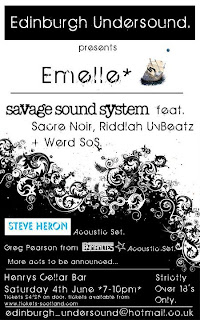 *Emelle
Three brothers, a friendly fiddler and finnie playing honest tunes and paying homage to the past, present and future and the people who've made us who we are - raggle taggle, if you will. We hail from the northeast banks of the Don but migrated further and further south and are now based in Edinburgh. Worked with Robin Evans, (The View, Manic Street Preachers), of TPot Studio on our debut EP, "what would my mother say" but we're now entirely self produced and managed. Live for the live shows!

The Savage Sound System began, both sonically and biologically, in a handful of rented rooms on the East Coast of Scotland... After buying their inspiration second-hand, they frequently found themselves without prior notice, recording surprisingly tasteful noises. These are systematically projected into the void via this very site. Historical Notes. From an early age this gaggle of muddles and misfits had an itch. Saturday mornings once a month tuning in to the Indie chart on ITV's Chart Show; Thursdays with Steve and Jo's evening sesh; Peel when the babysitter went out for a smoke. Like a creased brow at Pollock thinking: 'I can do that', they scratched incessantly at whatever medium came to hand...Thankfully they kept scratching...Tracking down misfit sounds, and humming a half remembered chorus, the System are undercover agents of their own demise. Upstanding citizens of a society reveling in free-fall they are blissfully unaware of their own importance. In an echo chamber of official propaganda designed to conceal, they play. The motto:.. You are what you beat...

Steve Heron will be entertaining you all with an acoustic set, Steve's from an Edinburgh based Indie band of the same name. After recently putting out their first album they have just come off the back of playing some really excellent gigs in 2010, Including Friday Night Live series of gigs (finalists), supporting Aberfeldy, The Bum Clocks. Stanley Odd & Holden, Stevie and the Moon + Steven Milne. Not to be missed!

Greg will opening the night with an a mixture of acoustic covers...

More acts to be announced..
Tickets available from http://www.tickets-scotland.com/ £4 each, £5 on the door!

KOF is secure in being a true reflection of his various influences and experiences. Musically it may be best to describe KOF as a rapper/singer-songwriter who creates music that is a fusion of inner city music genres, new school flair and old school flavour, mixed with conscious lyrics and big beats.

With local support from:

Posted by savage recordings at 10:35 No comments: