Sacre Noir
After some great shows in London, Paris and Berlin, Sacre Noir conclude their Summer Tour 2013 with dates in Glasgow and Edinburgh, performing with The Penny Black Remedy at both nights.

"Since being formed in 2006 by singer/songwriter Keith M Thomson, The Penny Black Remedy have been proudly defiant in the face of categorisation – focusing instead on utilising their shared love and passion for all forms of music from around the globe to create a wholly distinctive and unmistakable sound all of their own"

Both gigs also feature a superb third band lined up for each date - Mickey 9s in Glasgow and Lewis Gibson and the Midas Touch in Edinburgh. 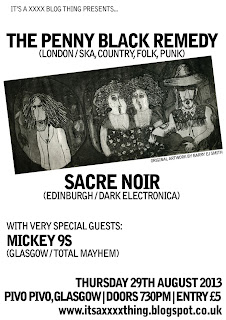 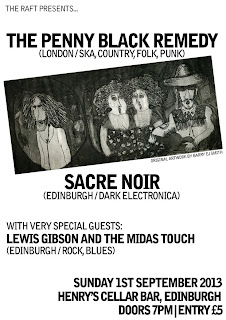 You can read the full story of the Sacre Noir Summer Tour 2013 (so far) on the Sacre Noir Tour Blog - http://sacrenoir.wordpress.com/
Posted by savage recordings at 06:38 No comments: