Unfortunately the gig scheduled for tomorrow night (Thursday 21st July) featuring the savage sound system has been cancelled due to circumstances beyond our control. Anyone who purchased tickets for this show online should have already received a refund. This has also led KOF to pull out of the instore at Elvis Shakespeare on the 22nd July, however Edinburgh MC Madhat McGore has kindly agreed to do a set, in preparation for his gig with Klashnekoff that night. Details of this event on the facebook page: http://www.facebook.com/event.php?eid=109865409105817
We also have some exciting news for Sacre Noir fans in Paris & Liverpool, regarding the Summer tour - more August dates to be announced shortly, keep up to date on the Sacre Noir facebook page.
Posted by savage recordings at 05:16 No comments:

Sacre Noir announce live Summer dates, kicking off with tomorrow night (Friday 15th July), once again at the lovely Belushi's Bar in Edinburgh. Into August there will be a weekend of shows in Edinburgh including Friday night (5th August) at Belushi's Bar featuring special guest The Riddlah (UVBeatz) fresh from his show with Madhat McGore at T in the Park and Waz of infamous fanzine Muckle Sandwich with a DJ set. Followed by Saturday night (6th August) at The Tea Tree Tea cafe on Bread St. with another all star line-up.
Futher into August Sacre Noir will be playing debut shows in London on the 12th August at The King's Head (Acton) and the 1st September at the White Lion (Streatham). Finishing off the summer season with a final show at Belushi's Bar, Edinburgh, with support from Edinburgh based electronica artist Forward Play.
Keep up to date with all further dates and details as they are announced on the Sacre Noir facebook page. 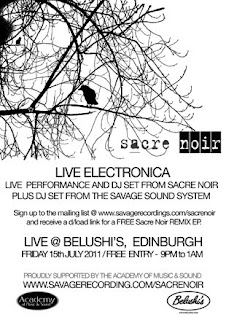 Posted by savage recordings at 09:04 No comments: