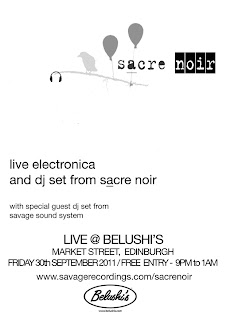 You can also check out a tour video diary from Sacre Noir featuring footage from several of the nights from the tour including Glasgow, London & Paris...

Savage Sound System
The savage sound system will be performing as part of the Concious Route night at Henry's Cellar Bar (Edinburgh) on Thursday the 8th December 2011. More details TBC.
Posted by savage recordings at 07:49 No comments: